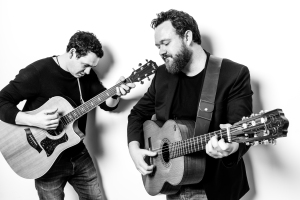 Infused with a healthy dose of the Steeltown grit that epitomizes the honest, hard-nosed, unpretentious music of the city of Hamilton, Ontario, the music created by The Dunlop Brothers contains that same spirit of independence, of quiet strength and raw authenticity as their hometown.

There is true artistry in their compositions, as both Justin and Matt Dunlop have been well schooled in a host of musical styles, and are unafraid of bending genres and creating melodies, harmonies and rhythms that are compelling and highly memorable.

The result is a melding of jazz, blues and roots music, combined with the edgy Hamilton rock sensibility that has defined many of the artists who have come out of Canada’s steel city.

“It’s been a long time coming and this project and the album that we’re working on is really important to us. All the things that we have done, all the hard work, the sacrifices and challenges that we have overcome have led us to this point and I think this attitude is reflected in our music,” said guitarist/vocalist Matt Dunlop.

“We have paid a lot of dues and now we are ready to really push the boundaries of where we are as musicians and songwriters and to take our music to the next level. We’re serious about our songs, how we interact with our audiences and continuing to work at our craft,” added vocalist/bassist/guitarist Justin.

Their father, a working musician in his younger days, instilled in the boys an appreciation for great Canadian songwriters such as Neil Young, Rush and Bruce Cockburn. Now, as musicians and songwriters in their own right, they have developed an affinity for such artists from Leif Vollebekk to Big Wreck and Sam Roberts Band – artists and bands who were able to create very unique songs, stuck to their artistic guns and yet cultivated a wide and loyal fan base.

Which is exactly what The Dunlop Brothers have strived to do since joining creative forces.

“Writing music has always been second nature for us both, and when we write together, I guess being brothers, we always seem to have ideas that click and can bounce things back and forth really quickly as we’re pulling those ideas together. Although we don’t really sound like any of those artists, they did give us a real appreciation for great songwriting, amazing melodies and the importance of the lyrics,” said Justin.

There is a natural link between siblings, something that makes collaborations such as writing music all the more special and with a definite focus. Justin and Matt each have their own musical experiences, preferences and journeys, but since they began pooling all their talents, energy and time on The Dunlop Brothers project, the results have been more than just satisfying, they have been incredibly special.

Recently completed compositions such as Old Dive Bar, Carved in My Mind and All the Other Things are indicative of the music the Dunlops will be releasing on their debut album – The Dunlop Brothers, Vol. 1. They are rootsy, powerfully emotive songs through which listeners can identify their own challenges, hopes and ambitions as they mirror the journey of the brothers through their early days in the music business, to the point where today they are on the threshold of something quite wonderful. The songs are honest, sincere, and well crafted musically, as Justin and Matt not only show off their prowess as writers, but also as vocalists and instrumentalists.

The varied influences – everything from jazz, to pop, to classic rock to down-and-dirty blues roots music is imbued in every note and every phrase. There is a sense that The Dunlop Brothers are channelling something deeper and more profound – words and melodies that can’t help but move anyone who hears them.

“Old Dive Bar talks about where we have been and all the dues that we have paid over the years. Carved in My Mind fits into that as well and looks at some of what we have seen, both good and bad, as we pursued our goals. And All the Other Things is looking at all things we have done and will continue to do to make it as a band,” said Justin.

Since pooling their artistic resources and embarking on this exciting musical venture, The Dunlop Brothers have created a reputation as a live act worthy of attention for the dynamism of their performances, the quality of their musicianship and the ability to draw in audiences with their authenticity.

Their inimitable ability as storytellers, and their easy-going charm makes them a must-see attraction on any stage.

“We put on shows that have a lot of different tones and elements to them. At times it can be like a rock show, but with the versatility and unpredictability of a jazz show. We love to be able really draw people into the performances and feed off of one another’s energy and emotion as the show goes along,” said Justin.

The Dunlop Brothers worked alongside producer/engineer Mike Monson at the well-respected Catherine North Studios, which has played host to the likes of local Hamilton legends Junkhouse, as well as Big Sugar, City & Colour, Broken Social Scene, The Glorious Sons, Big Wreck and more.

“It’s a great place to work. There is a story behind every photo and every piece of memorabilia in the studio. We’re producing the album ourselves, but we brought in Mike who we’ve known for years. We know what we want, we have a clear vision for our music, he’s helping us achieve that vision,” said Justin.

That vision including continuing to write, record and perform songs that are filled with memorable instrumental and melodic hooks, words that have depth, meaning and lead to introspection, and an overall vibe that is as fun and entertaining as it is thought provoking.

With extensive live playing experience, both as a duo and separately over their careers, and with an ever-growing catalogue of original music, Matt and Justin Dunlop are in a position to reach new plateaus and achieve many more ambitious goals as their musical journey continues.

This Saturday at The Corktown! Enjoy some amazing live music and donate if you can. Posted @withrepost • @shariandjonny Share The Warmth 2022 and it is definitely going to be our best one ever! Gather up your gently used coats and boots and mark November 12th on your calendar! We all have something to give! ♥️🎶🎵🎶♥️
🎶 This Wednesday, we’ll be playing a duo gig at the @soundofmusicfest Club Series…join us at The Port House patio overlooking the lake in Burlington. ☀️🌊Located at the Waterfront Hotel. 7pm start!
Matt!! Happy birthday, brother!! 🎉🙌🏼
Soon we’ll be back in the studio! Can’t wait! #thedunlopbrothers @catherinenorthstudios #newalbum #volumetwo #hamont #hamontmusic
Had a great time last week recording at @catherinenorthstudios. Vol. 2 is in the making! Big thanks to @willcrann @azemaitis @calebmoroz and @mikemons. Can’t wait for the next stage of the recording process. #thedunlopbrothers #hamont #hamontmusic #newalbum #catherinenorthstudio
Day 2 in the studio... @azemaitis @calebmoroz @willcrann @mikemonsonfilmandsound